Russia is the largest country in the world, straddling eleven time zones, and covering 17 million square kilometers. Russia’s shores meet no less than twelve seas and three oceans, with ports serving the diverse needs and trading priorities of this vast region.

The capital city, Moscow, is the biggest city in Europe. Its second city and cultural centre, St Petersburg, is situated on the Baltic Sea. The port of St Petersburg was built in 1885, and today it is still one of Russia’s largest, handling 59.9 tons of cargo in 2019. It is an important link with the ports of Ust-Luga,
Primorsk, Viborg.

Products from Chevron Marine Lubricants are supplied at these
locations, including the full complement of main engine oils. 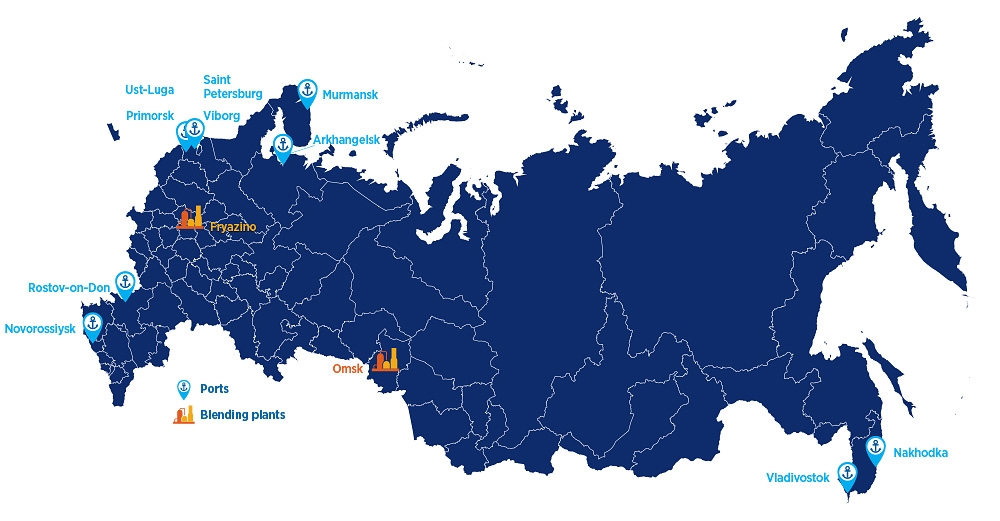 On the north east shore of the Black Sea is the port of Novorossiysk, it is located at the crossroads of major international transport corridors between Russia and
the Mediterranean Sea, the Near East, Africa, Southern Asia, Southeastern Asia, North and South America. Ice-free, the port is open all year round, has 89 berths with bulk terminals suitable for a tankers with a dead wight of 250,000 tones. Grain and bulk liquid cargo such as oils and oil products, compose major the major cargo groups for this port.

One of Russia’s largest ports on the Pacific Coast, the port was closed to international visitors until the break-up on the Soviet Union. Now, it enjoys Free Port status, and is in a prime position for trade with China, Korea and Japan. The port is well connected on land, it has 15 berths, and an average turnover of 11.9 tons as of 2019.

The port of Murmansk in the Barents Sea is a testament to engineering tenacity. Despite being located within the article circle, Murmansk forms a crucial part of global maritime trade networks. The Arctic Bridge, for example, calls at the Port of Murmansk, linking Russia to North America and the Far East. It remains ice-free throughout the seasons, providing a vital life-line to Northern Russia.

Chevron Marine Lubricant products are blended and manufactured in Omsk and Moscow (Fryazino).

For more information and to speak to a representative contact Kay Siemensen Kay.Siemensen@chevron.com