moving biofuels into the mainstream

November 2022 - Lower carbon intensity alternatives for shipping are being driven by international and regional regulations and initiatives. The International Maritime Organization (IMO) has set specific targets, both short and long-term, to reduce greenhouse gas (GHG) emissions from international shipping. The shorter-term measures include reducing carbon intensity, meaning the CO2 produced per tonne mile, by at least 40 percent from 2008 levels by 2030. There are also technical and operational measures aimed at improving the energy efficiency of ships.

Over the longer-term, the IMO has targeted a reduction in carbon intensity by at least 70 percent compared to 2008 levels. By 2050, IMO’s aim is to achieve a reduction in GHG emissions of at least 50 percent by 2050 compared to 2008, whilst pursuing efforts towards phasing them out completely. The IMO’s 4th GHG study concluded that this would require the introduction of low or zero-carbon marine fuels. A revision of the IMO’s initial strategy, adopted in 2018, is set to be adopted in 2023, likely leading to new or more stringent regulations, as well as the introduction of specific requirements regarding the carbon footprint of marine fuels.

The European Union (EU) Commission has also introduced proposals aimed at improving the sustainability of shipping operations, including adding shipping to its Emission Trading System (ETS). The ETS allows for the purchase of allowances to offset emissions. Other EU initiatives include FuelEU Maritime, a goal-based GHG intensity programme that aims to boost the production and uptake of low-carbon fuels (LCF) in marine transportation. It also obliges container and passenger ships to use onshore power supply (OPS) and ports are expected to facilitate both. The programme will gradually increase in stringency, and essentially requires ships calling at EU ports to reduce the carbon utilized in producing onboard energy.

Another European directive is the Energy Taxation Directive (ETD), which establishes the EUs framework conditions for the taxation of certain fuels. This could now be applied to marine bunker fuels.

The move towards the widespread adoption of lower carbon intensity marine fuels is gaining momentum, with collaboration between fuel producers, engine manufacturers, and stakeholders throughout the maritime sector being an essential enabler.

There are a number of alternative lower carbon intensity marine fuels currently under consideration, and engine manufacturers are developing means for utilising them. At the same time, studies are also being undertaken and demonstration projects initiated on the viability of continuing to use conventional fossil fuels along with onboard carbon capture and storage (CCS) systems.

In assessing the carbon footprint of alternative low or zero-carbon fuels, the production pathway for each should be taken into account. The current IMO GHG strategy is based on a Tank-to-Propeller basis, which means that to establish the carbon intensity of fuels, a full lifecycle approach should be adopted, where not only emissions from the combustion of fuel on board the ship are considered, but also upstream emissions from the production, transport, and distribution of fuels are taken into account. This means using a Well-to-Wake (WtW) assessment, which constitutes the environmental impact of Well-to-Tank PLUS Tank-to-Wake.

Of the alternative ‘future’ fuels, liquefied natural gas (LNG), as we know it today (grey LNG), is relatively well established already in marine applications. LNG can be considered as a transitional fuel bridging the gap between conventional marine fuels, and new alternatives fuels not yet widely available. One reason behind the adoption of LNG is the fairly rapid development of the associated supply infrastructure, with many of the world’s major ports now able to bunker the fuel. LNG requires cryogenic storage conditions, and its energy content, on a volume basis, is approximately 55 percent of that of today’s very low sulphur fuel oil (VLSFO). One of the concerns of LNG is the methane slip, which is a limiting factor for its GHG reduction potential on a WtW basis.

Methanol is another liquid fuel being currently used, mainly by methanol carriers, and because methanol is toxic and has a low flashpoint, safety guidelines have necessarily been developed. Today’s “grey” methanol is produced from natural gas, and the energy content is lower than conventional marine fuels (approximately 40 percent). Furthermore, on a WtW basis, it offers no real CO2 reduction compared to conventional fuels. Bio-methanol and e-methanol offer a more significant GHG reduction potential.

Liquid ammonia and hydrogen have an even lower energy density than methanol and LNG, but they both come with a safety risk. When produced from natural gas, so-called grey ammonia and grey hydrogen, do not contribute at all to lower GHG emissions, rather an increase is noted as illustrated in Figure 1. 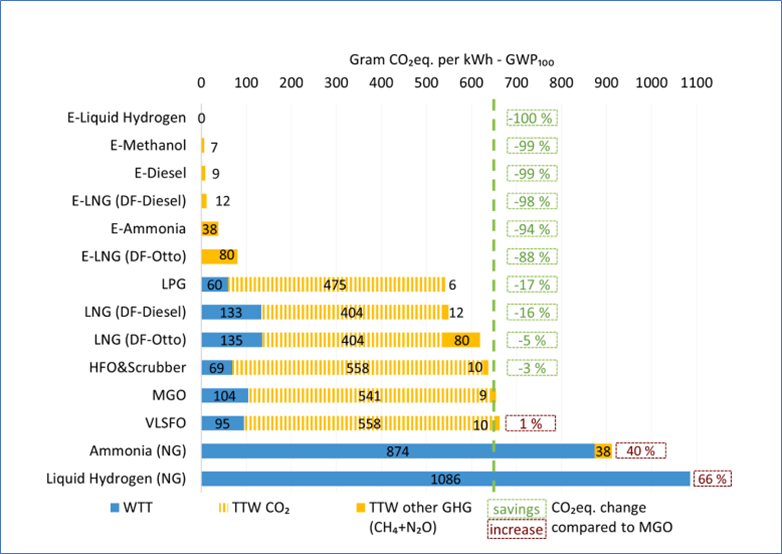 The use of liquid biofuel in a diesel engine is not new. In fact, Rudolph Diesel himself predicted that vegetable oils may over the course of time become as important as petroleum products.

Liquid biofuels are produced from biomass or organic waste and can be classified by generation. First generation biofuels, also called conventional biofuels, such as ethanol, hydrotreated vegetable oil (HVO), and the most widely used liquid biofuel Fatty Acid Methyl Ester(s) (FAME), generally referred to as “biodiesel”, are typically produced from crops or vegetable oils through technologies such as fermentation, hydrogenation or esterification. They are increasingly restricted from use as transportation fuel since they can compete with food production. Second generation biofuels use waste-based feedstocks, such as used cooking oil, forestry and agricultural residues, and municipal solid waste (MSW). The latter may require more sophisticated production processes, such as hydrothermal liquefaction or fast pyrolysis, while third generation biofuels are based on aquatic autotrophic organisms such as algae.

Figure 2 illustrates that second-generation biofuels offer the greatest GHG reductions of the listed biofuels – between 70 percent and almost 100 percent (WtW) compared to marine gas oil (MGO). This is due to their minimal impact on land usage, a large biogenic carbon uptake, and modest use of fossil fuel energy for feedstock conversion. 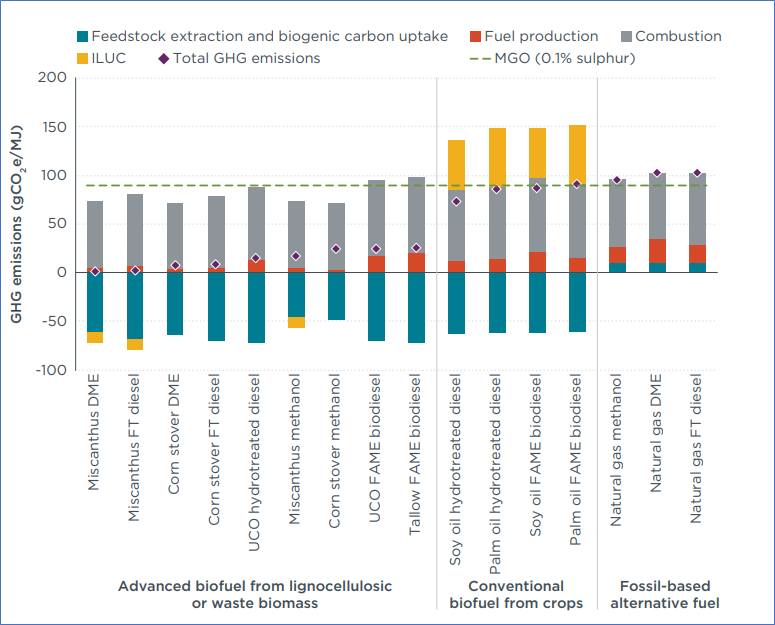 Blending liquid biofuels into fossil fuels not only reduces WtW emissions, but also has a positive impact on SOx and particulate matter emissions.

A barrier to biofuel usage in shipping has been the requirement under regulation 18.3.2.2 of MARPOL Annex VI stating that: ‘… fuel oil for combustion purposes derived by methods other than petroleum refining, shall not cause an engine to exceed the applicable NOx emission limit set forth in paragraphs 3, 4, 5.11 and 7.4 of regulation 13...’

This has necessitated ships to ask for an exemption from the flag state to run the biofuel trial, and to verify if the NOx emissions are in accordance with the relevant provisions of the NOx Technical Code 2008. At MEPC 78 however, a unified interpretation was adopted, where biofuel blends up to 30 v% are to be taken as being regular oil-based fuels. For biofuels and biofuel blends above 30 v%, no NOx emission measurements are required when NOx critical components and settings, or operational values, are in accordance with the engine manufacturer’s technical file.

As a marine drop-in fuel, liquid biofuels are compatible with existing marine engines and the supply infrastructure. The ISO 8217 marine fuels standard already allows the use of HVO and up to seven v% FAME in distillate marine fuels where the FAME is in compliance with EN 14214 or ASTM D7963. In fact, a number of demonstration projects with biofuel blends, have either been announced or successfully completed, where FAME was blended at up to 20v% or more with residual fuel oils.

FAME has good lubricity properties and improves the ignition/combustion of the fuel blend, as illustrated in Figure 3. An FIA/FCA analysis shows an increased estimated cetane number (ECN), a higher rate of heat release (ROHR), and an improvement in other FIA/FCA parameters.

FAME has typically a lower viscosity than fossil fuels, which results in the final fuel oil blend having a lower viscosity than a fossil fuel oil, thereby potentially impacting the handling of fuel oil onboard the ship (e.g. pre-heating temperature, centrifugal cleaning settings). The cold flow characteristics (typically higher pour point) and the higher susceptibility to oxidation of FAME might impact onboard storage aspects. At higher FAME levels, additional attention to the potential effect this may have on fuel system materials, such as seals, is warranted. Also, the lower net heating value of FAME in comparison to fossil fuels will have to be taken into account when considering fuel consumption.

The potential barriers to the broad acceptance of liquid biofuels as a marine drop-in fuel include the availability of sustainable biomass feedstock, the technology readiness of some production pathways, and competition for supply from other sectors, such as road and aviation applications. Cost will, of course, always be a consideration for the industry. When looking into more affordable biofuel options for the shipping industry, it should be emphasized that prior to use, the quality of other biomass-based products should be carefully evaluated.

The availability of a supply chain and bunkering infrastructure will be an influencing factor for the penetration of other alternative, lower or zero carbon fuels, such as methanol, ammonia, and hydrogen. Cost, energy density, and safety considerations for both the ship and its crew, will also influence the viability of such fuels.Biofuels represent a readily available lower carbon intensity alternative for the shipping industry. They offer a reduction in CO2 emissions on a WtW basis, with no need for engine modifications or major additional procedures. The main barrier for use in marine applications is competition from other transportation sectors that can affect its availability.